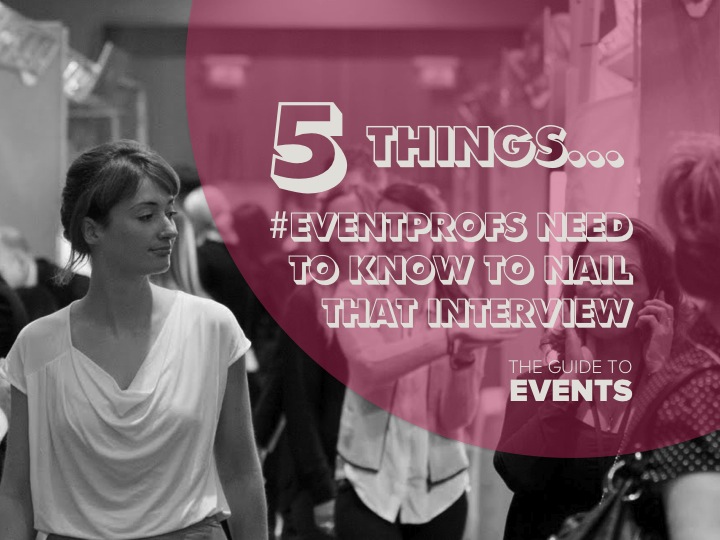 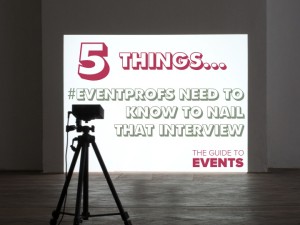 The Guide to Events has received a number of emails recently from event managers asking for advice on succeeding at interview. I’ve written before about recruiting and managing teams, but I hadn’t covered what to do in the candidate’s chair, so I thought I’d offer readers of The Guide to Events top five tips for #eventprof interviewees… I hope they help!

1. Look after your personal brand 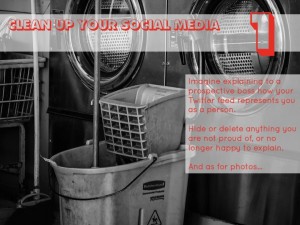 Researching candidates online before an interview is an ethical grey area, but recruiters are hired for results, not for their moral rectitude, so always assume they will know everything the interwebs can tell them about you before they meet you.

In-house and agency recruiters tend to be constantly under siege, busy wading through thousands of CVs, but freelancers and headhunters live or die by their recommendations, so tend to spend more time trawling the internet for reasons not to put unsuitable candidates forward, thereby risking their commissions.

I have worked with companies where background checks are standard and others where it would be considered a gross invasion of privacy to do so, but even if the recruiter won’t stalk you online, your new colleagues probably will, just as soon as your appointment has been announced.

The kind of things your digital footprint should say about an #eventprof will vary, depending on which industries you work in, but as a guide: 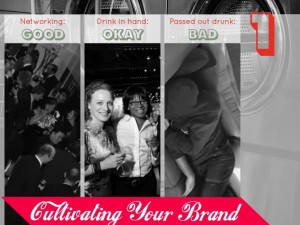 By running through your own history on sites like Twitter, LinkedIn, Facebook and Instagram, you’ll quickly discover that posts and images that seemed funny at the time may be cringeworthy now. Don’t allow a potential employer’s first impression of you to be one that would cause them to hesitate before hiring you.

Imagine sitting in a room with a prospective boss and explaining how your Twitter feed represents you as a person. Hide or delete anything you are not proud of, or no longer happy to explain.

This is not dishonest, it is simply good housekeeping. Applying for a new job is the ultimate exercise in marketing, where the product is your personal brand. You want companies to be completely happy buying what you have to sell, so that you can decide whether you want to sell to them.

2. Prepare examples of your skills in action 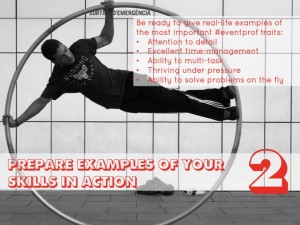 This is particularly important if you are applying for a logistical role, but in most event companies, there is a baseline of desirable traits for all roles, including:

If you are interviewing for any role in an events business, you will almost certainly be asked to give examples of those skills and abilities in action. Event professionals spend their lives lurching from crisis to crisis (usually created by other people, hopefully!) and remaining calm amid the chaos.

So think back to times when you have spotted mistakes that passed others by, managed your time effectively, kept several plates spinning, succeeded under pressure and solved problems quickly and painlessly – you will need them.

The don’t have to be examples from jobs you have done, they can be from any aspect of your life – interviewers just need to know that you will be able to cope well in a highly-stressful events environment. Once you have picked your examples, practice saying them out loud to friends or even the mirror, until you sound sure of them. 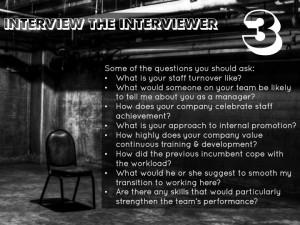 At the end of every job interview, candidates are asked “do you have any questions?”, just at the point the adrenalin rush has been replaced by the wave relief at having survived the confrontation intact.

You should have a list of pre-prepared questions about company culture and the detailed responsibilities of the role, but any good interviewer will have anticipated these and answered them already (soundtracked by your internal monologue screaming “I was going to ask that!”).

Still wanting to appear intelligent, but drained by trying to impress and barely able to remember your own name, you probably say that most of your questions have been answered already, thank you, and that you will be in touch if you have anything else you would like to ask.

This is where most candidates fail to establish whether this is the right role for them. So here is a list of questions you could hard-code into your preparation:

What most people forget when they are sitting in the candidate’s chair, is that they are also trying to assess whether they want to devote the next two, three or five years to working for this company; whether this is the kind of boss who is likely to call them at 9pm with an urgent request for the latest KPI figures for the management team meeting twelve hours later; whether this role (and the rest of the team) are adequately resourced to handle the work they are doing.

4. Carry out your due diligence 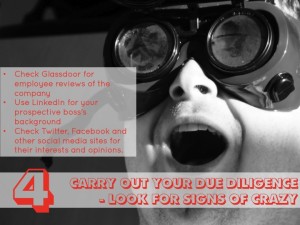 Find out about as much as you can about the company and people you are going to be working for (or with). In addition to reading up on the company’s mission, size, financial security and culture, spend a couple of hours running the same basic internet searches you are prepared for them to carry out on you

Check Glassdoor for employee reviews of the company; use LinkedIn for your prospective boss’s background; check Twitter, Facebook and other social media sites for their interests and opinions. Use the resources at your disposal to carry out due diligence on what kind of people you might be spending 40+ hours a week with for the foreseeable future.

Also, look for signs of crazy. In Oliver James’ book Office Politics: How to Thrive in a World of Lying, Backstabbing and Dirty Tricks, he says the three most common negative character types to look out for in a boss are narcissists, machiavels and psychopaths – each of which carry their own risks and rewards, and require different coping mechanisms.

In Jon Ronson’s The Psychopath Test, he explains that CEOs are four times more likely to be psychopaths than ‘normal’ staff, so while it may not change your decision about working for them, it is important to go into these roles with your eyes wide open.

(I swear the main reason I was offered one job was that I asked the boss – who my background search had shown to be off-the-charts intelligent – during the interview “what shade of crazy” he was.)

5. Be the best you that you can be 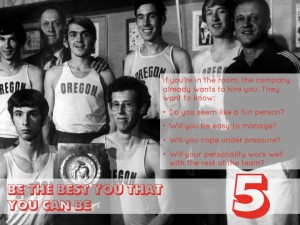 The thing no one tells you when you start applying for jobs – and in fact most people don’t find this out until they sit in the interviewer’s chair – is that if you’re in the room, the company already wants to hire you.

For many jobs – and certainly any role with the word “events” in the title – the sheer volume of applications means that hiring managers can be highly selective about who they choose to spend an hour in a room with.

Generally speaking, most hiring managers will only interview between three and six people. As a standard ‘events manager’ posting on LinkedIn will generate between 50 and 200 CVs, this means only 2-10% of applicants make to first interview stage.

This might sound terrifying, but the upside of this for a candidate is that if you have made it into the room, your CV has demonstrated that you are equipped to do the job: the company wants you to live up to the image you have sold on paper.

What the interviewer is looking for most is a cultural fit:

One American boss told me he liked to apply what he called “the Iowa test” in interviews: if he had to drive six or seven hours across Iowa with you to see a client, he wondered, would he find your company stimulating, or would he want to kill you by the time you arrived?

This is obviously not recommended HR practice, but it does give an interesting insight into how some hiring managers think. It also illustrates the fundamental truth of job interviews: if you have been invited to ‘pitch’ your personal brand to the company, they want to like you. It is equally disappointing to everyone around the table if an interview doesn’t go well.

As an interviewer, the best question I was ever asked was a pretty risky move, but it paid off. At the end of the meeting, he asked “Do you have any concerns about me as a candidate? I’d rather discuss and address them now than not be offered the role because you are uncertain.”

This was dangerous, because I did have concerns about his suitability for the role and inviting me to voice them could have backfired: no one wants to open the door to negativity during an interview scenario.

However, it was a clever move, because he was able to address my fears and I left the room utterly confident that he was the right person for the job. This was extremely intuitive and demonstrated both humility and a willingness to adapt to his surroundings.

Honesty is very important. There is no point lying your way into a job. Most people get caught out eventually, but more to the point, if you have to fabricate experience or skills to win a job, you’ll probably find it isn’t the right one for you. And if your new job is a constant struggle or you don’t fit into the team, you’ll be back out on the market again before your feet touch the ground.

So, in summary, be the best version of you that you can be… and you’ll knock their socks off! Good luck!

What the Marriott-Starwood Merger Means for #eventprofs