The latest British Meetings & Events Industry Survey (BMEIS) for 2015/2016 has been published and Allan Norbury, editor of M&IT Magazine interviewed me to hear my thoughts on common points of failure in apps and event technology. I said the biggest bugbear was still finding consistent enough wifi in venues to sustain pricey #eventtech 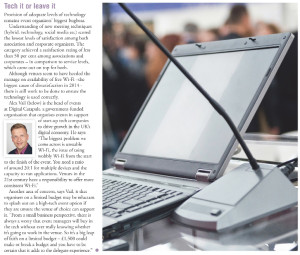 My concern was for small businesses running events, where organisers feel they need to keep up by investing heavily in apps and engagement technology, only for it to fall down as soon as more than 20 people try and open it.

More often than not, the problem lies with the venue’s wifi capability, rather than the design or build of the app. I’ve seen this a number of times, but it is very difficult to load test any technology to sustain a 300-person conference, so many organisers just have to cross their fingers and hope for the best.

You can read the full article here.

How to Survive a Major Tradeshow